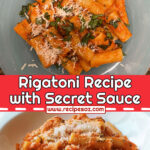 Rigatoni Recipe with Secret Sauce – This Rigatoni al Segreto recipe was the most closely guarded secret at Gino’s, one of New York City’s most famous Italian restaurants. When it closed, the recipe got out. But I think the amount of butter was way too low. So here’s my version. A simple salad is all you need to make a complete meal.

Some reviews from people who have tried this Rigatoni Recipe :

This is SO delicious! I decided not to rinse out the can with water as I didn’t want to dilute the sauce. Otherwise I stayed true to the ingredients. I cooked the sauce in my instant pot to cut down on the cook time. I think it’s best to use a microplane grater for the cheese because using any other style of grater and the cheese doesn’t melt as smoothly.

I don’t often write reviews. I had to!! I was lucky enough to eat at Gino in its heyday. Often and the meal always started with this magnificent dish. Stick with the original recipe (not too heavy handed on the onions. Its sweet enough.) Any great dish has a very distinctive after taste and this is precisely that. Now officially in my go to meals and sauce recipes. THANK YOU!!!!!

Click on the Next Page Button to continue reading.

Easy Recipes A to Z

Back to Top
Close

This site uses functional cookies and external scripts to improve your experience.

NOTE: These settings will only apply to the browser and device you are currently using.

This website uses cookies to improve your experience. We’ll assume you’re ok with this, but you can opt-out if you wish.