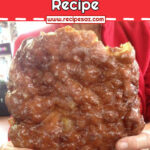 I was trying to replicate the Apple Fritters that the convenience store chain, QuikTrip, used to have. The ones they have now are just not the same. This recipe came darn close with the couple of modifications I made. As suggested, I doubled the nutmeg and added 1 tea. Cinnamon. I also increased the sugar to 1/3 cup. As suggested by another reviewer, I diced the apples and microwaved them for 4 minutes, then put them, liquid and all, into the batter and dropped the batter in 1/4 cupfuls into hot oil. Instead of dusting with sugar when done, I made a glaze of 1 cup confectioner’s sugar, 1 Tbsp. light corn syrup and 2 Tbsp. water, and drizzled that over the fritters. It dries to a sweet, slightly hard and crunchy glaze on the fritter. My husband says these are closer to the old QT fritters than what they have in the store now, but could be fried just a bit thinner and crispier. Next time I’ll add one more apple and see if that doesn’t thin the cakey-ness down just a hair. Great recipe!

Click on the Next Page Button to continue reading.

Back to Top
Close

This site uses functional cookies and external scripts to improve your experience.

NOTE: These settings will only apply to the browser and device you are currently using.

This website uses cookies to improve your experience. We’ll assume you’re ok with this, but you can opt-out if you wish.